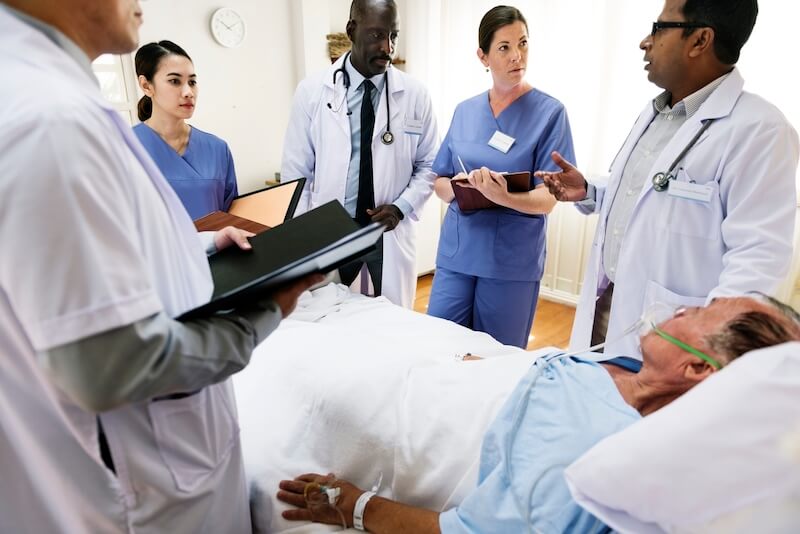 The number of Covid-19 patients has receded at Faxton-St. Luke’s Healthcare, but its leaders say they expect to stay in crisis mode for the foreseeable future because of persistent staffing shortages and the end of pandemic-related support they have been using as a crutch.

Signs of the stress abound: Emergency-room wait times are up, staffed beds are down and patients are being transferred hours away for treatments such as gastrointestinal care that previously were offered on-site. The hospital’s nursing home is reliant upon the National Guard to keep its doors open.

“This is not sustainable,” Ms. Stromstad said.

The health system spent $38 million in federal Covid aid during the last two years on higher staff pay, additional personal protective equipment, traveling nurses and to cover lost revenue from elective procedures, a spokeswoman said. MVHS has about $600 million in annual revenue, and its operating margin for each of the last two years was between $3 million and $4 million.

By spending $750,000 a week on traveling nurses, as was the case in February, “we are blowing through that in a month’s time,” Ms. Stromstad said.

Hospital executives say the stresses they are feeling show a perilous new reality for other health systems in rural areas and smaller communities like Utica, a city of 60,000 between the Adirondack mountains and old mill towns along the Erie Canal.

Stress from the pandemic, along with state vaccine mandates that took effect before the March 15 federal deadline, have driven away nurses and support staff, hospital leaders say. As a result, the number of staffed beds at St. Luke’s dropped to 155 on March 7, state data show, and a spokeswoman said the facility is often over capacity. The hospital is licensed for 258 beds, the spokeswoman said.

Ms. Stromstad said she is looking at taking more beds out of service because of the lack of staff. St. Luke’s could also limit the number of patients it allows to transfer in from smaller facilities in the surrounding region. Such a policy would have ripple effects beyond Utica, she said.

After a peak of 114 Covid patients in January of 2021, the hospital housed about 52 at the height of the Omicron wave in December. There have been fewer than 10 each day since Feb. 20, state data show.

The hospitals’ staffing difficulties come amid a tight labor market in many sectors and a nationwide shortage of nurses. A 2021 survey of 226 hospitals in 37 states by NSI Nursing Solutions Inc., a recruitment firm, found an overall registered nurse vacancy rate of 9.9%.

The problem is worse in upstate New York. There were almost 4,200 vacancies for registered nurses as of January at 36 hospital systems in the region represented by the Iroquois Healthcare Alliance, a trade group for area hospitals, according to President Gary Fitzgerald. That represents a 25.2% vacancy rate, up from 12.2% in 2020, the group said.

Peter Buerhaus, who studies the nursing workforce at Montana State University, said the retirement of baby boomers combined with increased demand for workers during the pandemic was an unprecedented shock on the nursing labor force.

“It is sort of like a perfect storm,” he said.

In the St. Luke’s emergency room, things got so bad on the Monday after Thanksgiving that officials asked the state for permission to divert ambulances to other facilities. The state’s response: Use paramedics in place of nurses.

They started IV lines and drew blood. “We had no other choice. Otherwise, I would not be able to see a single person that afternoon into that evening,” said Avinash Kambhampati, the doctor in charge of the emergency room. He expects the one-time fix will happen more regularly in the future.

Ms. Stromstad said the hospital may soon stop offering 24-hour dialysis services because of a lack of qualified staff.

Brianna Sangiacomo, the director of nursing for Mohawk Valley Health System said some patients have been transferred as far away as Westchester County, a 3.5-hour drive, because of staff shortages.

“We have to put the patient somewhere, so we just keep getting more travelers,” she said, referring to the traveling nurses. “I don’t want to discredit the travelers, but they don’t have ownership. They come and they go. They’re not reliable.”

To retain its existing staff, MVHS is giving workers who cover additional shifts bonuses and created a pantry with free groceries and toiletries for employees to take home.

The nursing school at St. Elizabeth Medical Center, which is also part of MVHS, announced a program last month in which tuition is covered for students and employment within the system is guaranteed upon graduation. For each semester of free tuition, the student must agree to work one year for MVHS.

MVHS is also building a new hospital to combine St. Luke’s and St. Elizabeth’s into a single campus set to open in 2023. The consolidated facility will allow for more efficient staffing and lower overhead, officials said.

Amy Bowerman, who oversees MVHS’s nursing home and home-care services at the long-term-care facility across a parking lot from St. Luke’s, said she is in constant competition for employees. The health system raised its minimum wage to $16 an hour, but nearby Turning Stone Resort Casino pays $18 an hour for cleaners.

Ms. Bowerman said she doesn’t know how she will keep the facility operating without the National Guard members who have been helping with cleaning, food service and patient activities. She has already stopped admitting new residhe nu

ber of Covid-19 patients has receded at Faxton-St. Lu