The Countries Stuck In Covid Limbo 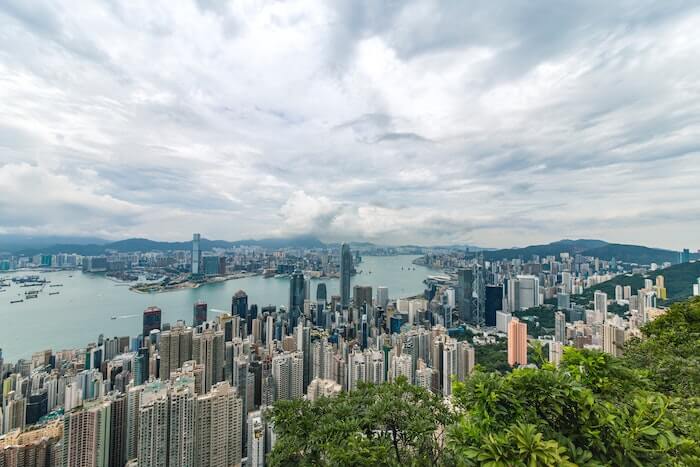 On a recent day at Hong Kong’s Kerry Hotel, a few city dwellers escaped the late-spring heat by wading in the property’s shallow pool, which, with its infinity edges, gave the illusion of spilling into the harbor. A few others lay on chaise lounges under umbrellas, reading books and lazily scrolling on their phones. These guests were not staying at the hotel; they had purchased day passes to use its amenities.

The true guests, the ones sleeping in the rooms at night, were a few floors above—and they had not checked in for leisure. Their faint figures could be seen through wide windows, walking the short distances across their temporary residences or looking longingly down at the pool from the gilded cages where they were spending two, or in some cases three, weeks under government-mandated quarantine. The Kerry Hotel offers many trappings of luxury, but freedom of movement is not currently one of them.

Remarkably, Hong Kong’s mandatory-quarantine period remains in place even for people who are fully vaccinated against COVID-19. It is one of the onerous, expensive, and often confusing regulations that the authorities have insisted on keeping, despite having done well managing the pandemic. Like mainland China and other parts of Asia, Hong Kong adopted a “zero COVID” approach when the coronavirus began spreading last year. Coupled with a strong response from city residents, many of whom remember the SARS outbreak of 2003, the outcome has been largely positive from a public-health standpoint: The city of some 7.5 million has logged fewer than 12,000 cases and exactly 210 deaths. It has been nearly 50 days since someone has died from the virus.

Singapore, Vietnam, Taiwan, South Korea, and mainland China, as well as Australia and New Zealand, were also adherents to the “zero COVID” or “elimination” strategy, which called for getting daily new cases close to zero, then keeping the number extremely low by quarantining arrivals, conducting extensive testing, and intermittently requiring strict social distancing, thereby allowing them to maintain a sense of normalcy. These efforts saved them from the devastation seen in places such as the United States and Europe, where health-care systems neared collapse and hundreds of thousands died. In a recent article published in The Lancet, researchers found that not only were there fewer deaths in countries that opted for elimination, but “evidence suggests that countries that opt for rapid action to eliminate SARS-CoV-2—with the strong support of their inhabitants—also better protect their economies and minimise restrictions on civil liberties compared with those that strive for mitigation.”

Now, though, some of these early success stories are struggling to procure and deploy vaccines that would allow their residents to reengage with the world, even as other countries battered by the coronavirus push ahead with vaccinations and return to a semblance of pre-pandemic life. Eliminating COVID-19 was the “optimal strategy in the short term,” Ben Cowling, the head of the epidemiology and biostatistics department at the University of Hong Kong’s School of Public Health, told me. The transition to a more sustainable approach has, however, proved to be challenging, he said. “Herd immunity through vaccination is the safest way out of the pandemic and back to normal life.”

Across the region, countries have adopted a series of prolonged and harsh measures to keep the virus at bay. Authorities have deployed extended border closures, ambush-style lockdowns, forced testing, and massive quarantine operations, as well as fines, jail time, and cancellation of work permits for rule breakers. The results have been positive, but are proving difficult to sustain, particularly as many of these countries struggle to deploy wide-reaching vaccination drives.

Some, such as Hong Kong, paradoxically appear to have been at least partially a victim of their own initial success. With few cases and deaths, many of the city’s people believe there is no rush to be vaccinated, Cowling said. About 17 percent of the population is fully inoculated, despite jabs having been widely available for more than 100 days. The vaccination rate is actually far lower for elderly residents and those living in care homes, who are at higher risk of serious illness or death than the average city resident. According to a study carried out by Cowling and other University of Hong Kong experts, only about 55 percent of the population will be vaccinated by September.

Other issues are at play in Hong Kong. Though the BioNTech vaccine is available and has proved to be popular, the government pushed ahead with approving China’s Sinovac vaccine in February, despite a lack of clinical data. That decision has intensified an already-deep distrust of the government, which is undertaking a sweeping reengineering of the city’s politics and drastically curtailing freedoms. Authorities appear to relish the additional tools the pandemic has provided to crack down on demonstrations and political gatherings. This month, police cited the threat of COVID-19 when they canceled the city’s annual vigil to honor those killed in the 1989 Tiananmen Square massacre. Yet an adviser to the government, a leading expert on coronaviruses, had said six days before the scheduled vigil that the city had reached its goal of zero cases and that the current wave of infections was finished.

The official response has also at times been disorganized, with multiple policy U-turns and a vaccination drive that, for the first few months, looked like little more than an afterthought for a government focused on cracking down on dissent. Carrie Lam, Hong Kong’s chief executive, has said she doesn’t believe that the authorities should provide incentives for people to receive the vaccine. Instead, the government has largely offloaded that responsibility to the private sector, which is offering up gold, luxury apartments, and a Tesla sports car as sweeteners to get jabbed. (A testament to Hong Kong’s astronomical property prices, one apartment that will be given away is valued at $1.4 million, but measures just 449 square feet.) A pro-Beijing politician has put her vintage Rolex up for grabs, but only members of her party or close associates are eligible to enter the drawing.

This ham-fisted effort to encourage Hong Kongers to get vaccinated, along with the “zero COVID” strategy that is still in place, has, if anything, inadvertently undermined any motivation for wavering people to get the jab. Hong Kong essentially treats vaccinated and unvaccinated individuals the same: Both groups must still wear masks in public and during workouts at gyms, and limit public gatherings to four people. Most sit through weeks-long hotel quarantines upon arrival from abroad, and navigate an ever-more-confusing flowchart of regulations for restaurants and bars. (Select business executives were offered a partial exemption from the hotel quarantine, but that program was quickly shelved only weeks after being announced.) “That is not the way forward in the long term,” Cowling said. He pointed to Singapore—where officials have begun shifting their messaging, telling residents that they should prepare to live with the virus over the long term—as having a more realistic approach.

Two other Asian societies that were successful early in the pandemic but that are now struggling—even as they try to continue pursuing an “elimination” strategy—point to the difficulty much of the region is facing in procuring vaccines.

One, Vietnam, has seen an uptick in cases since late April, which Todd Pollack, an infectious-disease expert for Harvard Medical School who is based in Hanoi, attributes to areas surrounding the country having more infections and a more transmissible variant of the virus. Once those infected entered Vietnam, they visited high-risk areas such as factories, industrial zones, and hospitals, which are crowded and offer poor ventilation. Thu Anh Nguyen, an infectious-diseases and public-health researcher at the University of Sydney, describes the outbreak as Vietnam’s “most severe” since the start of the pandemic, though the country has still recorded only 59 deaths from the virus. It has been scrambling to procure vaccines and has turned to crowdfunding from companies and individuals for national COVID-19 vaccination. It is also pushing ahead with plans to eventually develop and produce a domestic vaccine. But with only about 2 percent of the population having received one dose of a vaccine, the surge in cases has meant that “zero COVID” measures have been again rolled out. Strict social distancing in places such as Ho Chi Minh City will continue through June, officials have said.

Taiwan has also struggled to get sufficient doses. Its efforts to purchase vaccines have been complicated by interference from Beijing, according to President Tsai Ing-wen, who said that China stepped in to block a deal the island had with BioNTech. Though Japan and the U.S. have donated doses, Taiwan’s health minister warned last week that it will face delays in procurement. About 4 percent of the country has received one dose of a vaccine. Though cases have begun to fall again, Taiwan will be under what is called a “Level 3 epidemic alert” for most of June, meaning restaurants must serve takeout only, wedding banquets and funerals are banned, and mask wearing is mandatory. Tourists and transit travelers are barred from entry, and flight crews of Taiwanese airlines must undergo stricter-than-normal quarantine and virus screening.

In the early stages of the pandemic, much of Asia looked at Europe and the U.S. in horror, as people there refused to wear masks, socially distance, or adhere to lockdowns. A sense of disbelief was directed toward the U.S. in particular, where the severity of the virus was constantly downplayed by then-President Donald Trump and preventive measures became the latest culture-war flash point. Yet now the story lines appear to have flipped: Americans and Europeans are, more and more, able to freely and safely go to restaurants, meet in large groups, and return to life as “normal,” while their counterparts in East Asia, absent a society-wide vaccine drive, maintain harder restrictions in an attempt to suppress the virus in its entirety.

The variants now spreading in some Asian countries, says Andrei Akhmetzhanov, an assistant professor at National Taiwan University’s College of Public Health, are a result of higher incidence of disease in countries that had struggled to contain the virus earlier in the pandemic. Now these harder-hit countries are protected by vaccines, but others that did a much better job of suppressing the virus initially are not and, perversely, are more vulnerable to the threat of new variants.

Pollack told me he took “a little bit of offense” to the narrative of life reverting to pre-pandemic norms in some countries, while others seemingly remained trapped in the onerous routines of pre-vaccine life. Without the luxury of the vaccine, he said, the U.S. would see its “number of cases skyrocketing,” and the situation would be “unbelievably disastrous.”