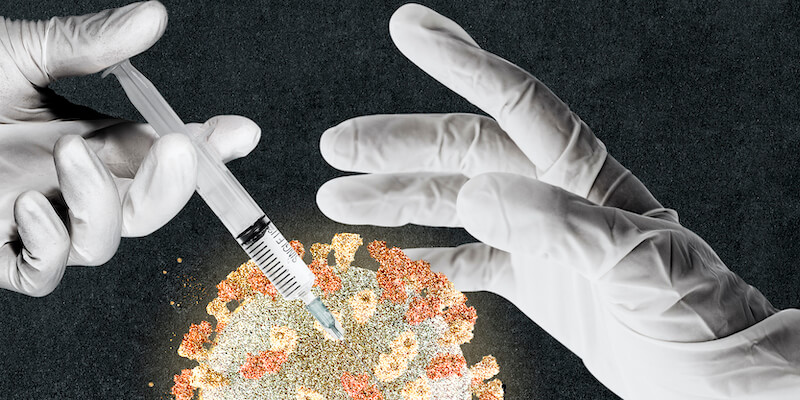 The president-elect’s pledge had a certain ring to it: “at least 100 million covid vaccine shots” in 100 days. That was on Dec. 8, before Joe Biden took office. On the fifth day of his presidency, Biden appeared to aim higher, saying 1.5 million shots per day was within reach.

Less than a month into the Biden presidency, as the rate of vaccinations continues to increase, the country has nearly reached the pace needed to achieve that milestone, with 1.48 million shots per day administered over the past week.

Yet as the country faces a deadly pandemic made even bleaker by emerging and more infectious variants of the coronavirus, which causes the disease covid-19, epidemiologists and public health experts say the Biden administration must set its sights even higher.

“The man on the moon is the kind of goal that we should be aiming for at this point,” said Leana Wen, an emergency physician and public health professor at George Washington University. “Having this 1 million a day, or even 1.5 million vaccines a day, is just not aspirational.”

Eric Topol, a cardiologist and founder of the Scripps Research Translational Institute, put it simply: “We can get to 3 [million per day].”

That daily total depends in part on the availability of the vaccine, which is in short supply in the United States. A less-than-vigorous vaccination program would prevent Americans from recovering some semblance of their pre-pandemic lives and would also increase the likelihood that new, potentially vaccine-resistant variants will become dominant in the United States.

On Jan. 20, the day Joe Biden was inaugurated, about17 million dosesof coronavirus vaccine had already been shot into Americans’ arms.

That day, Biden reaffirmed his “100 million shots in 100 days” pledge to administer1 million shots per dayover hisfirst 100 days in office.

Right now there are two approved vaccines, and each requires two doses. So if Biden wanted to vaccinate, say, everyone in America, he’d need to administer about660 million doses. At a rate of 1 million per day, we’d get there by October 2022.

If he wanted everyone to be vaccinated by Christmas Eve, he’d have to nearly double that to about1.9 million per day.

And by, say, Labor Day?2.8 million per day. The steeper that line, the faster the administration is vaccinating.

But it won’t be necessary to vaccinate everyone, just enough people so the disease finds it difficult to spread. Epidemiologists call that the “herd immunity threshold.”

Experts don’t know yet what percentage of the population that is, but it could be about80%.

We can look to see where thegreen linecrosses thepurple line. When that happens, we’ve reached herd immunity.

If we do some wishful thinking and lower theherd immunity threshold to 70%while increasing ourshots per day to 3.5 million, we reach herd immunity by late May.

But the herd immunity threshold could easily be higher — perhaps90%. And what if average daily vaccinations linger at just2 million? In that case, we reach herd immunity in November.

This model is useful for understanding how the pace of vaccinations might delay or hasten the end of the pandemic. But like all models, it is a simplification, and many real-world factors complicate the picture.

The forthcoming single-shot vaccine from Johnson & Johnson, which could be available to the public as soon as March, would allow authorities to vaccinate people faster and reduce the number of doses needed to reach herd immunity. Additional vaccines could be available by summer, further alleviating supply issues.

The Biden administration has taken steps to accelerate the vaccination rate, announcing Friday that it would deploy military personnel to create mass-vaccination centers and invoke a Korean War-era law to ensure Pfizer has access to needed equipment to scale up production of its vaccine.

On the other hand, children under 16 are, at least for now, ineligible to receive the vaccine, so a larger share of adults will need to get vaccinated for the whole U.S. population to reach herd immunity.

And while some people who already caught the coronavirus are probably contributing to herd immunity, it remains unclear how long they will remain immune. The Centers for Disease Control and Prevention recommends that people who were infected more than 90 days ago should still get the vaccine.

Their immunity may soon become even shorter as new, more infectious variants emerge and spread.

Biden and public health officials are racing against a minuscule but pliable opponent. The novel coronavirus replicates by invading a person’s cells and effectively turning them into factories, each of which can produce hundreds of thousands of copies of the virus.

Over time, errors occur in the duplication, resulting in slightly modified versions of the virus. Often, these mutations will have no noticeable effect on the virus. But given enough time, mutations will emerge that make the virus more dangerous.

For instance, when a person with a compromised immune system is infected, a prolonged battle with the disease can result in mutations to the virus that help it elude the body’s immune response, resulting in what scientists call an “escape variant.”

“Certain people who don’t have a good immune system, they go into accelerated evolution of mutations. That’s where we think the bad boys have come from,” Topol said. “They never conquered their infection, and it just keeps evolving like mad.”

Not only could variants like these short circuit the immunity of those who were infected with earlier coronavirus strains, they could also reverse progress toward herd immunity, requiring people who have been vaccinated to get new shots in the future.

When people first started gettingsick from the coronavirus, no one was immune and everyone wassusceptible to infection.

Over time, more people got sick. Meanwhile, those who hadrecovered developed immunity, though scientists are unsure how long it lasts.

Now that we have vaccines, people who never got infected can instead getvaccinated to become immune.

But there’s a problem. As the virus infects more people,it mutates. Some of those variants are more infectious. They’ve shown up in the U.K., South Africa, Brazil, the United States and elsewhere.

With enough time, new mutations can develop that prove resistant to immunity. These new mutant variants can become dominant, threatening to roll back progress toward herd immunity.

That’s why experts say it’s so important to vaccinate quickly. A rapid vaccination campaign can get a population to herd immunity before a vaccine-resistant mutation has a chance to emerge.

Vaccination delays could hamper Biden’s initial priority of controlling the outbreak: Public health experts fear that, left unchecked, these mutations could extend the pandemic’s end by months or even years.

“Part of the reason we discuss herd immunity is to say, first of all, you can be vulnerable to having severe effects from coronavirus, even if you’re previously young and healthy. That’s a medical fact,” Wen said. “But also the reason we get vaccinated is not just to protect us, it’s to protect others around us.”