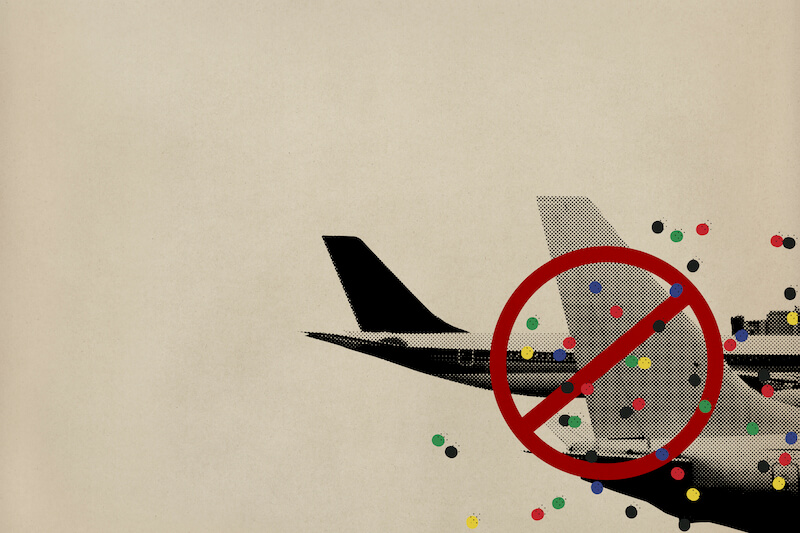 Before boarding a flight from Orlando to Los Angeles, Isaias Hernandez filled out a health checklist provided by United Airlines, asserting that he had not been diagnosed with COVID-19 and had not shown any of the disease’s symptoms in the previous two weeks.

But during the flight, the 69-year-old Angeleno collapsed. Three passengers gave him CPR for nearly an hour in the aisle of the plane, and the flight was diverted to Louisiana, where Hernandez was pronounced dead. The coroner’s report listed the cause as “acute respiratory failure, COVID-19.”

The Dec. 14 incident illustrates the deficiencies in the systems that are meant to prevent people from bringing the coronavirus aboard commercial flights and potentially spreading it to the people packed in around them. And it happened as holiday air travel ramped up. In the days surrounding Christmas, more than a million passengers boarded planes almost daily, reaching 1.3 million last Sunday — the most since March.

U.S. airlines boast layers of protocols intended to protect passengers from the virus, including the increased cleaning of plane cabins and a requirement that passengers wear face coverings except when eating or drinking. Nearly all of them also require passengers to fill out a health declaration before boarding. But the only repercussion for lying on the declaration or refusing to wear a mask on the plane is getting banned from the airline, if caught.

How often people with COVID-19 board planes is impossible to know.

Federal regulations require airline pilots to report to the Centers for Disease Control and Prevention any deaths or illnesses aboard interstate and international flights, and in March, the CDC updated its guidance reminding pilots of that duty. But on Thursday, the CDC said that it does not keep track of the pilots’ reports. The U.S. Transportation Department and the Federal Aviation Administration said they don’t keep track of COVID-19 cases on planes either.

Flight attendants are asked to be on the lookout for symptoms — coughing, sneezing, high body temperature — but airline representatives say they can’t evaluate every passenger.

Only a few airlines, such as Avianca and Frontier, take the temperature of each passenger before boarding.

Some U.S. airports, including Los Angeles International Airport, take the extra step of using thermal cameras to gauge people’s temperatures as they enter the terminal, but fliers are allowed to opt out.

The CDC launched an enhanced screening program last January for international passengers arriving to the U.S. from certain countries with widespread transmission of the virus. But it ended the program in November, concluding that the effort failed, partly because COVID-19 has too many symptoms that are also common to other illnesses; travelers could mask their symptoms to avoid detection; and even travelers with no symptoms can still carry and spread the virus.

What is needed, passenger rights advocates, flight attendant unions and academics say, is for the U.S. Department of Transportation to adopt uniform standards for airline safety, including a mask mandate that is enforced with steep fines. They also call on the federal agency to put more resources into contact tracing of known cases and improved access to quick and reliable COVID-19 tests that passengers can take before a flight.

“Without health security rules by [the Transportation Department], air travel will continue to spread COVID,” said Paul Hudson, president of Flyersrights.org, an airline passenger rights group with more than 60,000 members.

The Trump administration has been reluctant to impose airline screening and safety requirements, opting instead to let each carrier and airport create and enforce their own individual policies.

“Unless that message is coming from the top, it’s really hard to take action,” said Jan L. Jones, a professor of hospitality and tourism at the University of New Haven.

The tragedy on the Dec. 14 United Airlines flight was only the latest reported incident in which a passenger boarded a plane despite showing COVID-19 symptoms or testing positive for the coronavirus.

In late November, a Hawaii couple who tested positive for the virus were told to isolate in San Francisco but instead boarded a plane to Kauai, where they were arrested on suspicion of reckless endangerment, police said.

Several other incidents involving passengers who showed COVID-19 symptoms on flights have been reported to an aviation safety reporting database operated by NASA. The reports in the database are filed anonymously by pilots and flight attendants, with the exact dates and airlines’ names omitted to protect the tipsters’ privacy.

The database was created so NASA can report safety problems to aviation manufacturers and operators without putting those companies’ employees at risk of reprisal for flagging the problems.

According to a report in the database filed in October, the pilot of a commercial flight was alerted to a female passenger who complained of extreme pain while the plane was at cruising altitude. The pilot offered to divert the flight to the nearest airport to get her immediate medical attention, but she said she was feeling better after an EMT on the flight gave her oxygen.

“While she received attention on the plane, the passenger stated that she had been exposed to COVID in the last three days,” the pilot said in the report, which offered few other details.

On a flight in May, a pilot reported being notified by a flight attendant that a male passenger was “coughing, sneezing, not wearing a mask, and he refused to wear a mask despite repeated attempts by her to give him one.” The plane had just pulled away from the gate, the pilot reported.

The flight attendants also said that other passengers were starting to panic because the coughing passenger had gotten up about five times to use the lavatory, the pilot wrote.

“During a global pandemic, a visibly sick passenger was able to get through check-in, security, walk through the terminal, past a gate agent, and onto an airplane with ... other passengers and ... crew members,” the pilot wrote.

In August, a pilot reported that just before departure, a flight attendant said a passenger was coughing, not wearing a mask and had just vomited on himself.

“I made the decision that the person was not suitable for a [long] flight and was to be removed,” the pilot said in the report.

In other incidents, pilots and flight attendants fault their colleagues and employers.

A pilot reported to the database in September that a flight attendant had been feeling ill but had not disclosed her symptoms to the pilot or other crewmates. She later tested positive for COVID-19, the pilot said.

“Lack of communication and transparency from the [flight attendant] about her preexisting health condition led to the compromised safety of passengers and fellow flight crew,” the pilot wrote.

In April, two flight attendants reported that even though a passenger on one of their recent flights had tested positive for the coronavirus, their airline ordered them to show up for duty a few days later.

“The company refused to give us alternate travel despite being potential carriers,” one of the flight attendants wrote in their report in the NASA database. “We were not granted assurance of tests upon landing, or that we would be given leave to quarantine for the full recommended 14 days to allow for symptoms to manifest or not.”

But it’s the case on last month’s United Airlines flight — with Hernandez collapsing in view of other travelers, and with the attempts to revive him caught on video and posted online — that has painted the most vivid and accessible picture of the problem.

United Airlines said Hernandez “acknowledged on our Ready-to-Fly checklist that he had not been diagnosed with COVID-19 and did not have COVID-related symptoms.” The airline said it realized only after Hernandez died that he had “wrongly acknowledged this requirement.”

Hernandez had preexisting health conditions, including high blood pressure and upper respiratory issues, and was feeling sick leading up to the day of travel, the airline said in a statement.

Hernandez collapsed early in the flight. At least three passengers with medical training, including Tony Aldapa, an off-duty emergency medical technician from Los Angeles, performed CPR on him in the aisle.

Passengers overhead Hernandez’s wife telling Aldapa that Hernandez had COVID-related symptoms, including loss of taste and smell, according to United Airlines. At least one posted about it on Twitter, prompting hundreds of responses of outrage and panic.

The man behind me on this flight. DIED. OF COVID. MIDFLIGHT.

I have so many questions.

His wife confirmed a positive test when talking to EMTs.

Despite the comments by Hernandez’s wife, the plane was not disinfected immediately after Hernandez was removed, and the flight continued to Los Angeles, the airline said.

At the time, the crew believed Hernandez suffered a heart attack and offered the passengers the option to take a later flight, United Airlines spokesman Charles Hobart said. All the passengers opted to stay on the plane, he said.

Hobart said that the CDC contacted United Airlines and that the carrier provided the information needed to notify the passengers on the flight that they may have been exposed to the virus.